LOOKING AFTER THE ROYAL COLLECTION

with Tim Knox, Director of The Royal Collection Trust 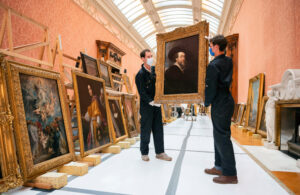 In April 2018, Tim Knox was appointed by HM The Queen as the Director of The Royal Collection Trust. With over a million objects, ranging from the Leonardo drawings to superlative French furniture and porcelain, from carriages to The Crown Jewels, the Royal Collection is one of the greatest art collections ever formed. Indeed, it is the last of the great European Royal collections still in the possession of a reigning monarch. Yet in recent years, public access to the Royal Collection has been transformed, not just by opening up the various palaces, but by loans, exhibitions, catalogues and other publications, learning and outreach, and partnerships with other museums. Yet the Pandemic, with its restrictions on opening sites and the dearth of international visitors, has presented the Royal Collection, like many heritage organisations and visitor attractions, with unprecedented challenges.

Yet the Royal Collection is not a museum, it is still essentially the private collection of HM The Queen. What is more it is a working collection, where artefacts and, in some cases, astonishing works of art, still perform the functions for which they were originally commissioned. Tim Knox speaks about his job running the Royal Collection, and touches upon some of the more surprising and puzzling aspects of his responsibilities. 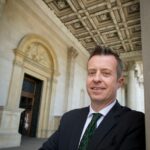 Tim Knox was appointed Director of the Royal Collection by HM The Queen in 2018. Prior to that he was Director and Marlay Curator of the Fitzwilliam Museum between 2013 and 2018, where he made a number of important acquisitions and planned the Museum’s masterplan, New Ways In. He was Director of Sir John Soane’s Museum in London between 2005 and 2013. Here he restored Sir John Soane’s glittering architectural treasury to its appearance in 1837, just as its founder wished, and converted the neighbouring houses to provide facilities for the museum.

Brought up in Nigeria and Fiji, he studied History of Art at the Courtauld Institute of Art. He was Assistant Curator at the Royal Institute of British Architects Drawings Collection 1989-95, and moved to the National Trust, first as its Architectural Historian, becoming its Head Curator in 2002. He is a Fellow of the Society of Antiquaries of London and a Member of the Society of Dilettanti. He is Co-Patron of the Mausolea and Monuments Trust, which he helped found and Chaired 2000-2004. He currently sits on the Advisory Panel of the National Heritage Memorial Fund and is a Trustee of Yale University Press London.

He regularly lectures and writes on aspects of architecture, sculpture and the history of collecting. Publications include Sir John Soane’s Museum London (2010), The British Ambassador’s Residence Paris (2011), The Lost House Revisited (2017), with Ed Kluz and Olivia Horsfall-Turner, and The Rebirth of an English Country House: St Giles House (2018), with the Earl of Shaftesbury.