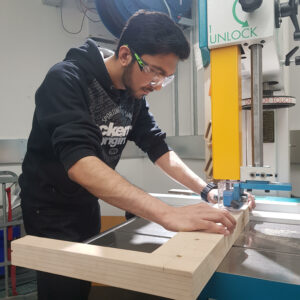 I am an Architecture graduate from the University of Westminster, who has recently won a Westminster Learning and Teaching Excellence Award. Other recent achievements include winning the first Creative Dimension Trust Annual Award. Outside of architecture I enjoy drawing cityscapes, building LEGO models and sports such as Darts. Ultimately, my career goal is to become an architect as well as a tutor.

My first workshop was Stone Carving at Building Crafts College in 2016, where I quickly gained an appreciation for stonework, and more importantly classical architecture. This led me to help with an installation at the Goldsmith’s centre in 2017, where I met architect Steven Kennedy. Steven took me a tour of the Grimshaw offices and this is where I realised that architecture was something that I really wanted to do. Later that year, Steven and Grimshaw took me on for a week-long work experience [placement] where I loved working at the office.

I went on to do an Etching workshop in late 2017, and the next year I returned to Grimshaw to do Graphic Design, provided via TCDT. I also took part as an assistant tutor on the Signwriting course in 2018 at Dulwich college, where I learned a lot myself. In 2019, I also acted as assistant tutor at Zone Creations for the Dream to Product workshop, where I had the chance to use my transferrable woodworking skills.

In 2020 I graduated from university and took part in what was perhaps my favourite workshop, Architectural Gilding, where I gained an appreciation for the craft of gilding. It also gave me the chance to restore an architectural element which would be seen by thousands of passers-by, something which gives me great pride.

Nothing can teach you how hard and intricate a skill is until you do it yourself, and this is what I have experienced. Meeting Laura Clarke at the Etching workshop also taught me that it is very possible to make a living out of being an artist, something which is often in doubt in the minds of many.